Founded in 1990, Trifleet Leasing is a global Top 5 tank container leasing company. We are a prime lessor, with more than 30 years of experience. With a fleet of 19.000+ tank containers (excluding financial lease), we are a company that boasts stable long-term growth. We have a worldwide network of offices, agents, depots and surveyors. Headquartered in Dordrecht (Main Port Rotterdam, the Netherlands), Trifleet has additional offices in Houston (USA), Singapore, Hamburg (Germany), Shanghai (China) and Paris (France). We also have a dedicated team of agents located in Sao Paolo, Italy, South Africa and Japan.

Since 2013 the International Tank Container Organisation (ITCO) provides a Fleet Survey that documents the development of the global fleet of tank containers and the top players in the market.

In all those years, Trifleet accounted for 6% of the lessors’ fleet, and has been ranked as #4 lessor since the 2016 Survey. 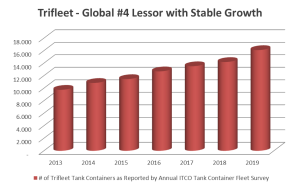