Welcome to our Pressroom! Here you can find our press releases, background information, press photos and our media contact. 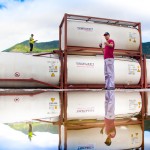 Back to our pressroom

The collaboration builds on the strength of the two companies: Trifleet’s expertise and reputation as a premier tank container lessor; and, Textainer’s industry leading size, purchasing power and access to competitive cost of funds. Both companies will continue to operate independently and to focus on remaining the most reliable supplier of containers in their respective markets.

Intermodal tank containers are used for the transport and storage of liquid foodstuffs, chemicals, and gases. The manufacturing and operation of tank containers is a strictly regulated activity, requiring specialized expertise. Financial details of the agreement remain confidential; however, both companies expect the collaboration to be immediately accretive to their respective financial results.

“This is an exciting opportunity and major step for Textainer,” commented Philip K. Brewer, President and Chief Executive Officer of Textainer. “We have long been interested in leasing tank containers, but hesitated due to the need for additional customer relationships and technical expertise which we do not have. Trifleet is a recognized leader in the tank leasing industry known for its deep expertise and professional service and for the superior quality of its containers.  We view this partnership as a true ‘win-win’ for both companies.”

“We are excited to join forces with Textainer, the industry leader and world’s largest lessor of intermodal containers,” commented Philip J.R. van Rooijen, Managing Director of Trifleet. “Our partnership will enable us to grow more rapidly due to our increased possibilities to invest, supported by Textainer’s size, strong purchasing power and demonstrated access to low cost financing.  We are proud that Textainer determined that the experience and expertise of Trifleet were essential for its entry into the tank container market. Apart from our high quality tanks and deep expertise, our customers expect a supply of tank containers whenever they need them. Our partnership with Textainer enables us to further deliver and expand on that commitment.”

Textainer Group Holdings Limited has operated since 1979 and is the world’s largest lessor of intermodal containers based on fleet size. As of the most recent quarter end, Textainer had more than 1.9 million containers, representing more than 2.8 million TEU, in its owned and managed fleet. Textainer leases dry freight, dry freight specialized, and refrigerated containers. Textainer is one of the largest purchasers of new containers as well as one of the largest sellers of used containers. Textainer leases containers to approximately 400 shipping lines and other lessees and sells containers to more than 1,100 customers worldwide and provides services worldwide via a network of regional and area offices, as well as independent depots. More information is available on the Company’s website at http://investor.textainer.com.

Trifleet Leasing is the world’s largest owner managed tank container leasing company, providing a first class rental fleet that spans the globe. As of 1 May 2013, Trifleet had a fleet of more than 9,300 owned and managed tank containers, excluding containers subject to lease-purchase arrangements. Trifleet focuses on providing top quality, reliable tank containers, expert advice and professional, responsive service for the leasing of its standard and special tanks such as gas tanks, lined and cool tanks, electrically heated tanks and swap tank containers. Trifleet is proud to be 100% owned by its management team. More information is available on the Company’s website at www.trifleet.com.